URGENT – EFFECTIVE 3/4/22 AND EXTENDING FOR THE NEXT 90 DAYS ALL CALLS FOR EMERGENCY SERVICES SUCH AS AUTO, FIRE, AND EMS WILL BE HANDLED BY SWFD AND THE WILLIAMSPORT BUREAU OF FIRE.

SOUTH WILLIAMSPORT BOROUGH IS NOW USING SAVVY CITIZEN TO COMMUNICATE WITH RESIDENTS.  WE ARE COMMITTED TO IMPROVING RESIDENT COMMUNICATION & SAVVY CITIZEN WILL BE UTILIZED TO REACH RESIDENTS ON MOBILE DEVICES FOR PUSH NOTIFICATIONS, TEXT MESSAGES, AND/OR EMAILS WITH IMPORTANT ALERTS OR OTHER IMPORTANT NOTIFICATIONS.  PLEASE FEEL FREE TO SHARE WITH NEIGHBORS & FRIENDS & SIGN UP BY DOWNLOADING THE SAVVY CITIZEN APP FOR FREE AT GOOGLE PLAY OR APP STORE OR VISIT https://www.savvycitizenapp 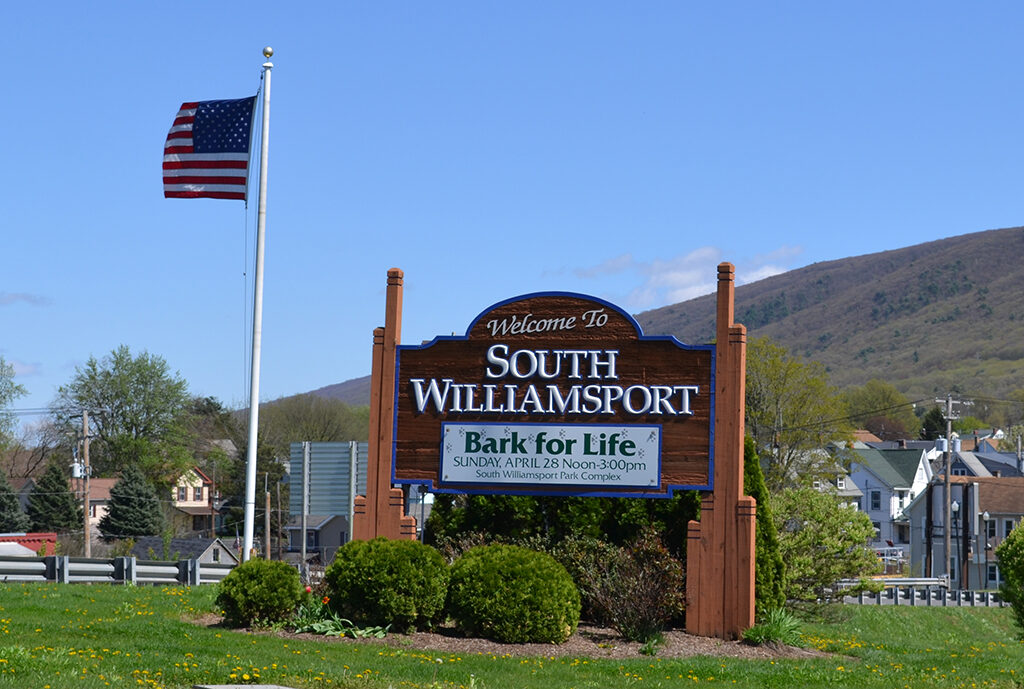 South Williamsport is located in northeast Lycoming County and lies on the south side of the Susquehanna River from Williamsport.  At quite an early period, a village grew, which was named Rocktown.   Before the completion of the canal, the descending trade on the river had become very heavy requiring accommodations for rest and refreshment.  At the mouth of Hagerman’s Run was a favorite place to “tie up”, so Michael McDonough established a tavern for convenience of the public.  The first real movement towards a town at this point was when Jacob Weise bought a tract of forty acres and laid it out in town lots.  He also established a brick yard near McDonough’s tavern and thus promoted trade in his settlement.  Bootstown grew up around the furniture factory of George Luppert, and the sawmills of Green, Sands and Company, and the planning mill of Valentine Luppert.  These two settlements – Rocktown and Bootstown are now included in the Borough of South Williamsport.  The Borough was incorporated in November of 1886.

The government consists of a Mayor and a 9-member borough council with three members from each ward.  The first ward extends from the border of Armstrong Township on the east to the east side of Market St., the second ward begins at the western line of Market St. to the east line of Clinton St. and the third ward extends from the west line of Clinton St. to the Duboistown Borough line.

The Borough is located in the 83rd State Representative District, the 23rd State Senatorial District and the 10th U.S. Congressional District.

South Williamsport is a residential community with small businesses.  The Borough is approximately 1.9 square miles in size.  There are approximately 23 miles of roads.

South Williamsport is known internationally as the Home of Little League Baseball.  Games begin mid-August of each year at which time traffic more than triples through the Borough.  It is a wonderful part of the summer activities.  The local area bustles with visitors from all over the world.

The spirit of the South Williamsport residents is evident in the support of borough activities and in their commitment to maintaining and keeping their homes in good condition.